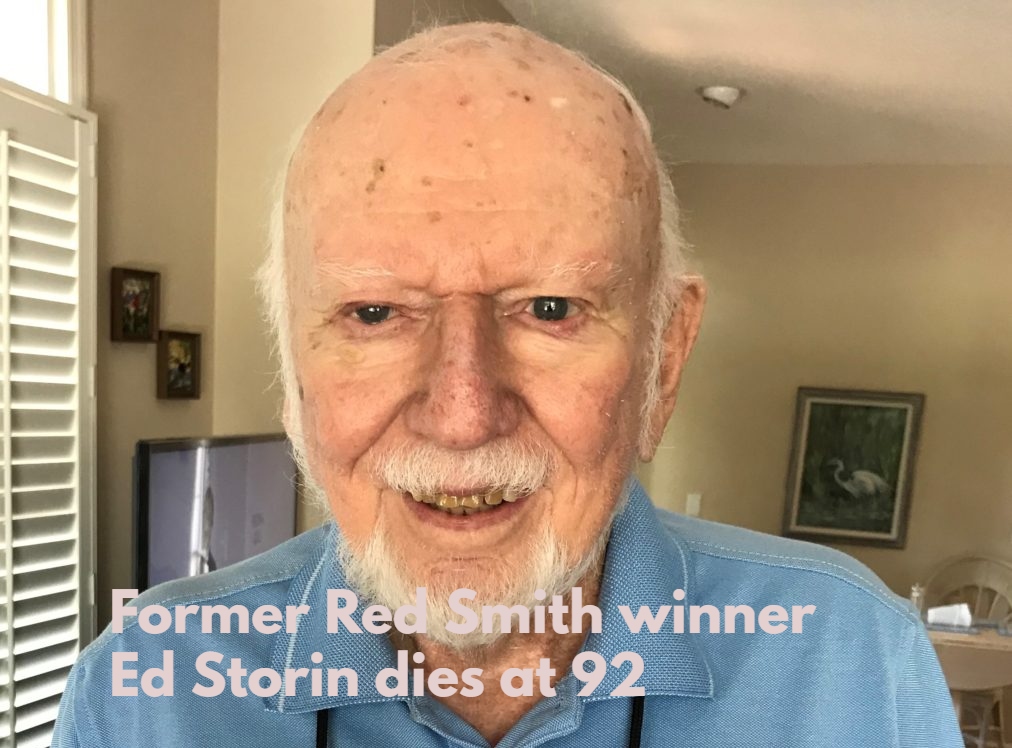 Ed Storin, the longtime sports editor of The Miami Herald who died April 25 at age 92, was both old-school and forward-thinking. He spent 40 years at the same paper (1951-1991), working his way up from copy boy (a position he was alerted to by telegram) to sports clerk, sports writer, assistant city editor, executive sports editor and finally associate managing editor for sports and budget.

Storin was a founding member of the Associated Press Sports Editors, which will begin its 50th year in 2023. He served as the organization’s longtime treasurer, was inducted into its Hall of Fame in 2010, and is the only person to win both APSE’s Red Smith Award, in 1992, for excellence in sports journalism, and the Jack Berninger Award, in 2019, for meritorious service to APSE.

Few sports editors in the business put their stamp on a sports department and its people like Storin did at the Herald. More than three decades after he left, those who worked with him say the impact on their lives – professional and sometimes personal – was an indelible one.

Storin, who attended the University of Miami, was one of just three sports editors in a half-century period. In that time, Miami transformed from what revered columnist Edwin Pope called a “sports wasteland” with no Miami Dolphins, Heat, Marlins, Florida Panthers, or even championship-caliber University of Miami, to a high-profile sports city.

Dave Wilson, politics and government senior editor and former Miami Herald executive sports editor, still remembers Storin’s first words to him after Wilson started as a Herald copy boy in 1976: “Watch out for the cigar, kid.”

They “really put sports journalism on equal footing with local reporting and health reporting and what then were called the ‘serious reporters,’” Wilson said. “There were still always the snide comments about (sports being) the toy department. I understand why people felt that way. But the founding of APSE and taking sports journalism seriously is what helped open doors to diversifying staffs, and changing the rules of engagement between journalists and the teams that they cover and creating a really important new code of guidelines and ethics for sports journalism.”

Storin’s mantra was be prepared for anything. He’d say “you always have to wear a belt and suspenders at the same time,” said Paul Anger, who was hired by Storin from the state desk at the Fond du Lac (Wis.) Reporter in 1972 and succeeded him as executive sports editor five years later. Anger was one of many sportswriters and editors Storin mentored who went on to national prominence in journalism.

“He was APSE,” said Bill Eichenberger, APSE executive director, a past president, and now Las Vegas Review-Journal assistant sports editor. “He was the sort of strong, principled leader you did not want to disappoint. I wonder where the organization would be today without his dogged attention to its finances. He was also a mentor to me and so many others in APSE. I always strived to make him proud. He’ll be missed.”

Storin’s forward-thinking ideas put the Herald among the elite sports sections nationally. During his tenure in 1981, the Herald hired its first full-time female sportswriter, Christine Brennan, and quickly put her on a major beat, the Florida Gators.

“Both Ed and Paul Anger were so supportive of me at a time when many sports editors still did not support women in sports journalism,” Brennan said. “They also fought my locker room battles with me and for me. I was so fortunate that my career began at a place run by someone with the integrity and dignity of Ed Storin.”

Storin, who also served as bureau chief for Knight Ridder newspapers during six Olympic Games, was groundbreaking in his emphasis on photos telling the story. At a time when color photography was in its infancy, Storin didn’t want just pretty pictures. The big play was paramount as the event’s cover photo, even if it wasn’t the day’s best frame. He insisted on always shooting “overheads” – having a photographer stationed high up in the press box or stands to shoot the entire field, every play. The game’s key play, sometimes from that vantage point, often appeared as a sequence of frames in the paper, with explanatory arrows or diagrams showing details of what happened.

In horse racing, once a big part of the Miami sports scene, Storin had photographers set up cameras at different points along the track or past the finish, and frames fired remotely to cover the action.

“We had one of the best staffs in the country,” said Joe Rimkus, a Herald photographer from 1974 to 2014. He said Storin changed the way he shot football. Other photographers would shoot from the sidelines, but Rimkus started camping out in the end zone, better to capture the whole field and less chance of being blocked by referees or others.

A lot of the guys said we covered the games not guided by photo editors, said Rimkus, but “because of the way Eddie Storin wanted it covered.”

“If you screwed up, he told you. There was a respect for him but also a fear. So you always tried to do the best you could. It made you a better photographer.”

Under Storin, the Herald’s reputation grew for covering big events well, from high above to ground level –photos, column angles, reporters asking the right questions in the postgame locker room.

“Eddie was old-school in that he held people to a high bar,” Anger said. “He was a pioneer in the way that he looked at how to tell the right stories, whether they were stories with headlines or photos that told the story that you wanted to tell.”

Born in Providence, RI, Storin loved sailing and was a lifetime Boston Red Sox fan. He and his wife of 69 years, Ginny, once owned a parrot named Charles. Warm hosts, they welcomed staffers and family to their home for parties where he wasn’t your boss. He wanted to know more about you, Anger said.

Storin’s buddy, Pope, kidded him about his limited culinary appetite for mostly grilled cheese, red meat and boiled potatoes. He found sustenance in making the paper better for readers. In his 1991 farewell column to Storin, Pope wrote: “Storin is the dervish dubbed ‘The Hornet’ for buzzing through this battle on your behalf. He has scrapped and clawed for more space and better deadlines. He has not always won. … If he had to take to a truck with Herald distributor Matt Murphy for support to deliver later papers and scores, he would do it. If he had to put his sun-burned dome on the line to make sure something in Seattle, or Seoul, got covered right, he did it.”

His demanding nature made his praise even sweeter. For years, Anger kept in his wallet a copy of a complimentary note Storin had written to staffers and posted on a board in the newsroom after a big event.

Storin could cut through all the distractions that came with running a sports department or later, newsroom finances.

In the 1980s, the Herald and Knight-Ridder poured money into its Mideast bureau in Jerusalem to upgrade its office, apartment and car for family use. Reporter Marty Merzer had recently moved there, and quickly realized the Hebrew-language public school wasn’t going to work for their 9-year-old daughter. Could The Herald pay the high tuition cost at the American International School? A few hours later, word came back to enroll her. Storin would figure it out. “Just one of many ways in which Ed Storin was a mensch,” wrote Merzer in a Facebook post.

After Storin’s retirement from the Herald, he and Ginny moved to Hilton Head, S.C., where Ed played golf, followed his beloved Red Sox and wrote a sports column for the local paper, The Island Packet. He was, as expected, a tough edit. Take out a line or two, or merge two paragraphs to avoid a trim, and you’d get a call to make sure it was for good reason. He would occasionally phone with questions or suggestions about the paper’s content. Even in retirement, Storin cared about what appeared on the page.

Storin was “a guy who, in his own way, was a people person,” Anger said. “And you can see that by all the comments that people have made on Facebook and (who) really knew him and remember him as somebody who made a mark in their lives as a mentor or friend. And then you had the dimension of him being a pioneer and really a genius and advancing sports journalism.

To remember him, the family requests donations to a rescue organization for retired thoroughbreds, After The Races, in Elkton, Md. (aftertheraces.org)