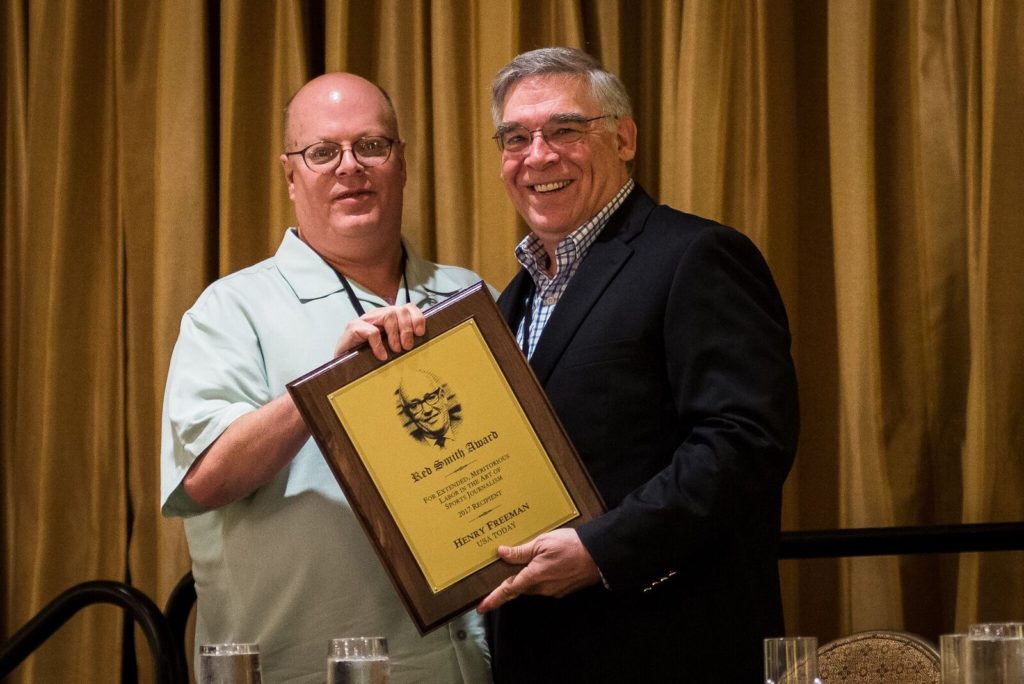 Henry Freeman saved APSE from extinction. That alone might be enough to warrant giving him the 2017 Red Smith Award, but that’s not the only reason he’s worthy of sports journalism’s top honor.

Before he retired in 2011, Freeman achieved as much as an individual can accomplish in journalism, most notably as the founding sports editor of USA Today, president of APSE and the Vice President/News at the News Journal in Westchester County, N.Y., when the paper won awards for its coverage of the Sept. 11 terrorist attacks.

For the rank-and-file of APSE, he made a huge difference when he was an officer from 1985-1988, helping to establish a budgetary system that assisted in preserving the organization to this day.

“The most important winter meeting was at Tampa in 1987,’’ he said. “We came out of the ’86 convention in Phoenix having overshot our capabilities. It was a very nice convention; there was a big turnout, but it was a little bit too lavish.

“We starting looking at the future of the economics of the organization and we were going to go belly-up … bankrupt.’’

That’s when Henry, APSE first vice president at the time, worked with others to solve the problem.

“Henry broke down the cost of membership,’’ Doyle explained. “We had between 500 and 600 members. We were losing money. He estimated the costs for APSE to serve each member. Money for the newsletters, directories, what had to be spent up-front for meetings that weren’t sponsored. Basically, he back-loaded the budgeting process and structured the dues process to ensure that membership would pay for it; he even made it possible to grow some revenue. He figured out what (was) needed to stay fiscally solvent.’’

Freeman started writing about sports when he was 16 at Prince George High in Virginia. His first byline was in the Petersburg Progress-Index. After attending the University of Georgia, he became a sports editor at age 22 for the Anderson, S.C., News-Leader, a new publication.

“I got to push the button to start the press,’’ he said. “We tightened the bolts on the press and ran the first edition. I did everything you could to put the paper out, writing a column, helping the news editor on his section. I help paste up pages, (ran) the typesetting machine. I did everything but sell ads, and I learned what it took to put a newspaper out at a very young age.’’

He then moved to the Greenville (S.C.) News as an assistant sports editor under Dan Foster, who encouraged him to stay on the editing side despite his award-winning success as a writer.

That choice led him to the Wilmington, Del., News-Journal, where he helped start the Sunday paper, and then on to Oakland, Calif., where he help start another new publication, East Bay Today, which highlighted a huge and informative sports section. His work there also brought him to the attention of Al Neuharth, who would become the founder of USA Today.

While Freeman was assistant managing editor at the Oakland Tribune, he was commuting to the East Coast to work on prototypes for Neuharth’s brainchild. Neuharth eventually named him the founding sports editor for the ground-breaking publication.

“Our job in sports was to create an anchor to let the rest of the paper establish itself, find its place,’’ said Freeman. They also had to look at things differently as a national publication.

“The backbone of every sports section is the fan base of the pro teams in your area and high school coverage,’’ he said. “We didn’t have that. We created the Across the USA sports page; we took high school sports and made it a national story.

“We couldn’t cover the Phillies as well as the Philadelphia papers but we knew from our research that 77 percent of baseball fans follow one or more teams than the teams in their area where they grew up. That led to expanded box scores, how the runs scored and the notes. We let the agate tell the story. That became skeleton we built the section around.

“Standings hadn’t changed in 100 years; we added last 10 games and streaks. Bill James had just written his book. The explosion of sports statistics was coming and we jumped on that. We wanted to establish that we were a consistent source of information. That’s the standard at most places now.’’

USA Today also was highly competitive about breaking news, which helped establish its credibility. As Freeman notes, they did not use anonymous sources.

His great success at USA Today led to other jobs in the Gannett system, including being named editor in Wilmington, Del., where the paper was named the improved publication in the Gannett chain, and publisher at the Bridgewater, N.J. Courier-News, where his leadership turned the publication around financially.

He missed working in a newsroom, however, and moved to Westchester County, N.Y., where he was the Vice President of News/Editor and the chief digital officer until his retirement on Jan. 2, 2011.

At Westchester, Freeman oversaw a newsroom that won a Pulitzer Prize for editorial cartooning by Matt Davies and a prestigious Deadline Club of New York Award for its coverage of the first 48 hours following the terrorist attacks on Sept. 11, 2001.

“I can’t think of anywhere I’d want to be more than in the middle of that newsroom,’’ he said of the days following Sept. 11.

Freeman would work another 10 years before retiring with his wife, Margaret Crabtree Freeman, to Tryon, N.C. … located,  Freeman says, on the first ridge of the Blue Ridge Mountains.

The next five journalists in voting totals, Terry Taylor, Dick Young, George Vecsey, Billy Lyon and Stan Hochman, are all automatically nominated for the 2018 award. All others will have to be nominated next year.